Skip to content
For more than a couple of years I’ve been dealing with a nightmare-like problem that I could not get solved with Excel. The solution I was working with implies choosing between nearly infinite combinatorial possibilities. The problem in question has a lot of dependencies in a variable number of variables you can set, is an open problem in its definition, and I was looking for the optimal one. You bet I will never achieve it. I was also stuck wandering if I could face situations where several options were possible; and I couldn’t discard that as not pausible. I considered GA as an alternative, but never put the enough time on studying the possibilities, considering I have not -or do not know, that is the same- a tool for GA in VBA. Times I spend  a bit more learning GA in YouTube or in blogs did not scratch the surface, and the only XLS file I played with was very basic, and came from this old post from Paras Chopra blog, and another one from Dermont Balson’s InsaneExcel death blog (under Artificial Intelligence). But none of them seemed enough to get in the thing… fortunately, I found two posts in spanish that put a lot more light into it (1 and 2).

Genetic Algorithms is a technique that simulates the logic of Darwinian selection (in ‘The Origin of Species’, Darwin stated that from a group of individuals the best will survive) process. Kinda evolution.

Namely, a “simulated” population of chromosomes is randomly created and allowed to reproduce according to the laws of evolution with the hope that a very fit individual chromosome will eventually result. These chromosomes are actually (encrypted) candidate solutions to a problem, so when a good chromosome evolves, a good solution to a problem has evolved. It tries to emulate how populations accumulate differences over time due to the environmental conditions acting as a selective breeding mechanism. In other words, GA is a algorithm which makes it easy to search a large search space. By implementing the Darwinian selection to the problem, only the best solutions will remain, narrowing the search space as generations evolve. GAs can be used where optimization is needed, that is where there are large solutions to the problem but we have to find the best one(s). But they also have some disadvantages: Some important terms to consider:

How Do GAs Work?

First a random population of chromosomes are created, and tested against the fitness of each one with a special fitness function. Although all the initial fitness values are probably very low (since the algorithm randomly created them), some are still higher than others. These chromosomes with higher fitness values are given a correspondingly higher probability to reproduce in the next generation. Thus for each generation in the evolution, a fitness function simulates natural selection by pushing the population in the direction of improved fitness (much like how natural selection nudges a biological species toward improved fitness with regards to its environment). As a general convention, reproduction in the GA is diploid (sexual), meaning that when two chromosomes are mated, pieces (genes) of each are combined in the offspring. Thus chromosomes recombine their parts at random (two point crossover) gene locations, occasionally producing a fitter chromosomes. This improvement to the gene pool is amplified by a corresponding increase in that fitter chromosome’s probability to reproduce. While there is no guarantee that genetic algorithms will find the optimal or “best” solution to a complex problem, they have been successfully applied to a wide variety of theoretical problems such as optimizing information networks because they iterate to better solutions. The trick, if one exists, is to write a fitness function that can successfully guide the evolutionary process.

The algorithm is almost same in most applications, and only fitness functions are different to different problems. The general algorithm is as follows : Here comes very handy the code development made by Paras, that I post here with light modifications: Sub BuildPopulation(Population As Integer, LenghtOfGenome As Integer, MaxFit As Double, NotifyExceed As Double, Mutation As Double, CrossOver As Double) ‘Popu’ is the number of individuals. ‘LenghtOfGenome’ is the length of chromosome ‘MaxFit’ is the maximum fitness which ca ‘ n be acquired by an individual. It is ge ‘ nerally 100. ‘NotifyExceed’ is the range which tells the algorithm to notify the user when fitness of any individual goes beyond this level. It is generally 99. ‘Mutation’ and ‘CrossOver’ are probabilities. Evolution of the population is defined by following algorithm DO UNTIL StopEvolution = True Assign Fitness to each individual Notify the user if a solution is found Kill all the worst individuals IF less then 30% of population is dead Or All the population is dead then

Mutate all 33% of the population Kill all the worst individuals

END IF Kill all the worst individuals Select the parents Start breeding Mutate a random individual if probability allows. LOOP In the above algorithm the algorithm mutates 33% of population if less or all individuals are dying because in both the situations the necessary evolution does not take place. And crossing is done every time because without crossing new generation cannot be made. 33% of the parents are selected on the basis of their fitness i.e. fitter the parent more the children he will have and another 33% of parents will be selected randomly. Take two individuals from the parents list. And then take a random crossover point. Interchange the genes to produce two new individuals. There are some ways to do this: One-point, two-point, and uniform crossover.

Take any random individual and take a random point. Change the gene on that point with another random value. The general aspect of a settings panel could be like this: 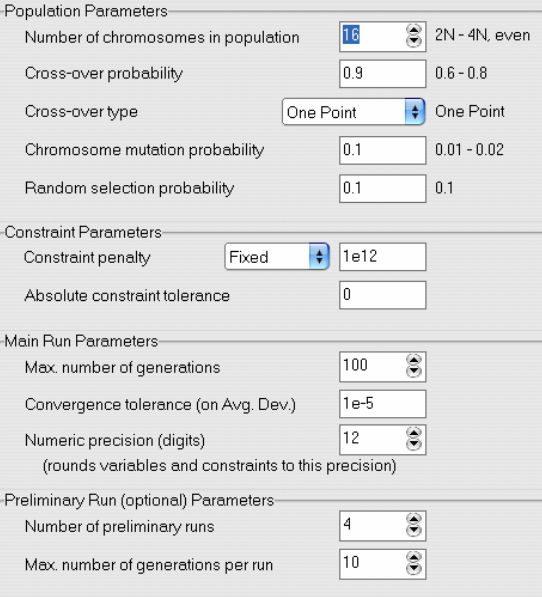 VBA implementation… Some more code to come as it gets done…

We use cookies to ensure that we give you the best experience on our website. If you continue to use this site we will assume that you are happy with it.Ok